Shandong province, an economic powerhouse in East China, has been providing strong support in the fight against the novel coronavirus epidemic while also promoting economic and social development.

Last year, the total value of Shandong's imports and exports exceeded 2 trillion yuan ($285.2 billion) for the first time. This year the province will continue to expand foreign trade and international cooperation as well as promote high-quality development through a series of favorable policies and national strategies.

A series of high-speed high-horsepower engines are currently being assembled at a workshop operated by Weichai Group, one of the largest heavy truck and component developers in the Shandong city of Weifang. Overseas rush orders prompted Weichai to restore full production on Jan 27. 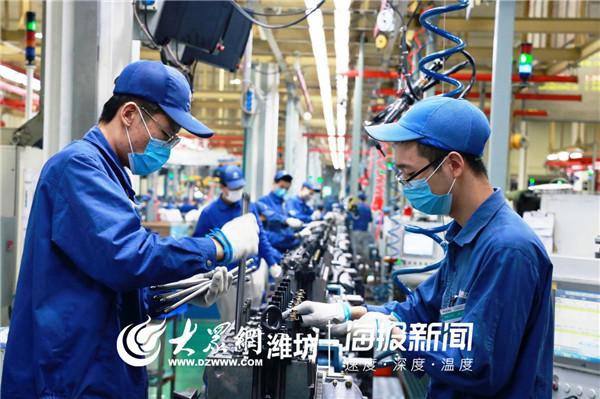 Employees works on a production line at a factory operated by Weichai Group. [Photo/dzwww.com]

"Trade frictions and protectionism have cast a shadow over global trade; nevertheless, Weichai has pledged to expand the foreign market under the Belt and Road Initiative," said Tan Xuguang, chairman of Weichai Group, adding that the company's sales to India, Italy, Romania and other countries increased by more than 200 percent last year.

With Weichai setting a strong example, countries in the Belt and Road, ASEAN (Association of Southeast Asian Nations), South America and other emerging markets have become engines for the growth of Shandong's foreign trade.

Official data showed that in 2019, Shandong's imports and exports to all major markets except the United States continued to grow, among which the total trade value with Belt and Road countries hit 603.09 billion yuan, up 15.9 percent.

"87 of the world's top 100 tire companies have partnered with us," said Zhang Gongyun, chairman of Himile Group in Shandong's Gaomi city.

Zhang said that his company has seen a surge in European orders since last year and is operating at full capacity. He added that they have built warehouses in Europe which offer faster delivery than their local counterparts.

Shandong is also playing a significant role in supporting the nation's economic upgrading. The region became the first comprehensive pilot zone in China to replace old economic growth drivers with new ones. Efforts began to show results in the structure of its export products. 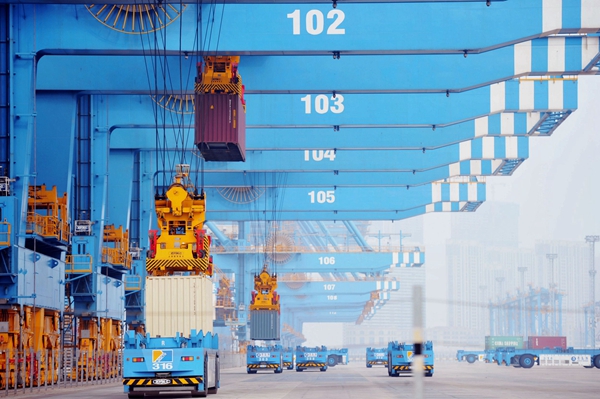 A fully automated container terminal at the Port of Qingdao in East China's Shandong province. [Photo/VCG]

Shi Yong, deputy director of Qingdao Customs, said that in 2019, Shandong's domestic brand exports were worth 261.48 billion yuan, up 14.2 percent year-on-year and accounting for 23.5 percent of the province's total exports.

Amid the ongoing epidemic, Shandong governments at all levels have resolved issues for local companies such as organizing work resumption, logistics, and gathering sufficient production materials and items for epidemic prevention and control. 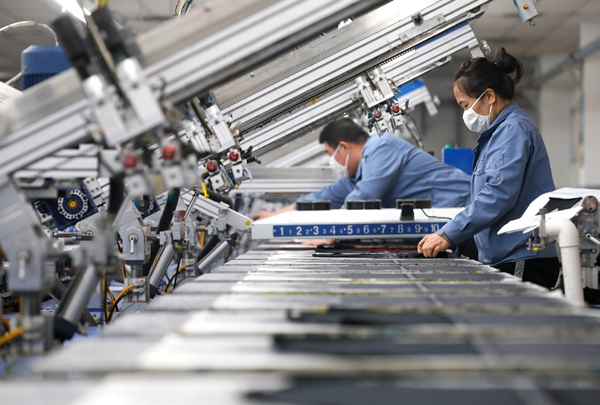 Workers at a printing enterprise in Jimo district, Qingdao, Shandong province on Feb 22, 2020. According to official data, a total of 23,266 industrial enterprises above designated size in Shandong have resumed production, accounting for 82 percent of the total as of Feb 19. [Photo/Xinhua]

According to the Shandong Provincial Department of Commerce, as of Feb 18, 29,250 of the 42,780 foreign trade enterprises in the province had resumed work, a rate of 68.4 percent.

"If we look at the Shandong FTZ, we can see that 112 tasks and new measures have been proposed to boost institutional innovation and promote the development of an export-oriented economy."