"The rooster in Shandong can be heard in South Korea" – this is a popular saying in the Republic of Korea (ROK). In recent years, the bilateral strategic cooperative partnership between China and the ROK has been deepened.

Shandong, which is just across the sea from South Korea, has become one of South Korea's closest trade partners and the bridgehead of China-ROK trade and economic cooperation.

A Shandong government delegation led by Liu Jiayi, Party chief of Shandong province, recently visited several cities and companies in South Korea in a bid to promote mutual cooperation in infrastructure, trade and investment, and other sectors.

As the largest port city in South Korea, Busan has always played an important role in trade with Shandong, and it was the first stop on the Shandong delegation's trip.

"Shandong is the top choice for many Korean tourists visiting China, and is also the most popular overseas investment destination for Korean enterprises. We pay close attention to the development of the Shandong free trade zone and its marine economy," said Busan Mayor Oh Keo-don. 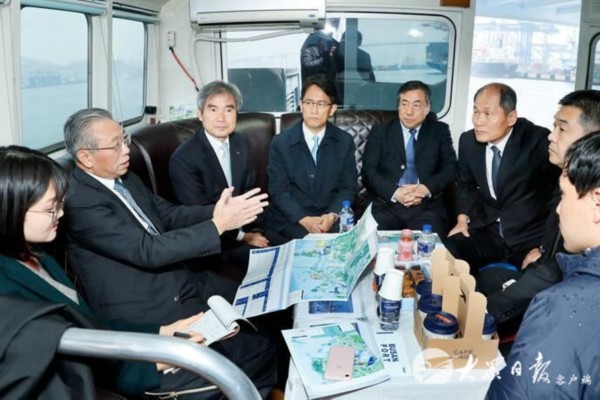 The Shandong delegation travels to Busan Port by ship on Dec 1. [Photo/dzwww.com]

The Busan Port, as the largest port in South Korea and the sixth largest container port and second largest cargo transshipment port in the world, dispatches 268 ships every week to different parts of the world.

"Our goal is to turn the port into a global hub for maritime logistics and promote the development of the country's national economy," said Nam Gi-chan, president of the Busan Port Authority.

He said that Busan Port is accelerating the construction of new port facilities and an intelligent port in order to enhance its international competitiveness.

"Busan Port in South Korea and Qingdao Port in Shandong are both important international ports. Qingdao Port has been developing rapidly in recent years, and we hope to strengthen cooperation with it," said Nam.

A meeting on Qingdao - Busan economic and trade cooperation is held on Dec 1 in Busan, South Korea. [Photo/dzwww.com]

"The two-way logistics channel will promote the smooth flow of people, capital, technology, and information driven by the development of trade. This will greatly fuel the development of both cities," said a researcher from the China Waterborne Transport Research Institute.

Shandong and South Korean companies have also joined hands to participate in the Belt and Road Initiative and contribute to the development of the large Eurasian market.

"Both Shandong and South Korean enterprises need to explore overseas markets to make use of their strength in technology, equipment, engineering, and construction. They hope to help improve infrastructure and transform industry in the host country," said Jia Jiqing, an official from the Department of Commerce of Shandong Province. 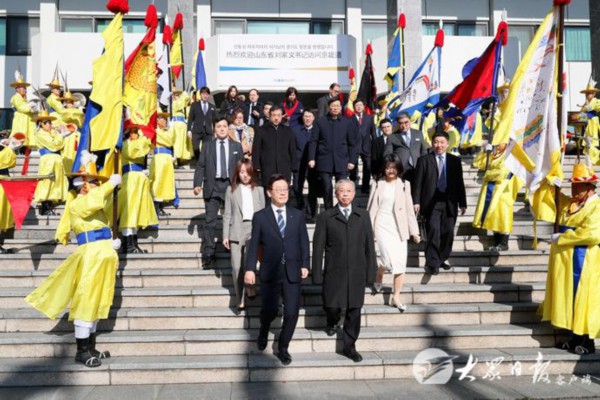